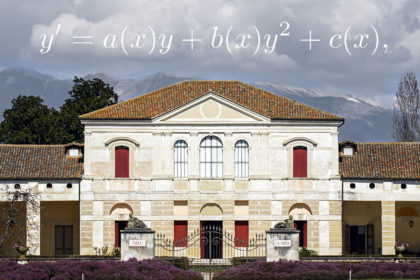 It was Count Giovanni Rizzetti who designed and built Villa Ca ’Amata, along the ancient Roman road Postumia, following the architectural canons of the proportional harmonic average he theorized, determining the height according to the width and length. Villa Ca ’Amata, in all its parts, is built with measures derived from the golden section, the most common canon of proportion from the Renaissance onwards. The proportional harmonic mean was also used extensively by the architect Francesco Maria Preti, who counts among his works Villa Pisani in Stra, Villa Corner della Regina in Cavasagra di Vedelago, the Cathedral and the Academic Theater of Castelfranco Veneto.

Rizzetti and Preti were both frequenters of the Schola Riccatiana, a cenacle of Treviso intellectuals influenced by Enlightenment theories that met in Ca’Amata to discuss art, science, music, architecture around Jacopo Riccati, founder of the club. It was thanks to the minds of these men that the proportional harmonic average formula was born, applicable both in the mathematical, architectural and musical fields.

Central, in the blackmail debate, was the attempt to rediscover the laws of harmonic relationships, which were considered known to the ancients and which had already been the subject of research and experimentation for Renaissance artists, primarily Palladio.
Following a line of thought inspired by classical Greek philosophy and linking to French theorizations, they sought those laws of absolute and universal harmony, of a physical-mathematical nature, which have concrete expression in musical harmonic progressions. These are perfectly applicable to architecture, passing through geometry, since, “the same consonances that delight the ear, also delight the vision”. The algebraic analysis and acoustics in the field of science, architecture and music in the field of art, then came to a unitary synthesis, implemented in the figure of the architect-scientist-musician.